Project Merlot - Back to the Old Skool 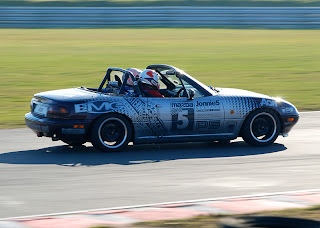 After a sabbatical from Snetterton circuit Project Merlot returned on 17th February for its 3rd visit to the track, this time with Javelin Trackdays. The morning, although cold at -4°c was dry and clear and the day remained so through out the event with temperatures climbing up to 6°c by the afternoon. Project Merlot saw the return of Steve Hider (soon to be out with his very own track prepared Roadster), Tony “Dad” Brown & Robbie Marsh to the driving seat and added a new name to the already distinguished list of Merlot drivers, Steve Alleyne. It was the first time Mr Alleyne had driven any car on any circuit so not only were his nerves tense but so were the nerves of the Team! After signing on and listening to the briefing all drivers were sent out in 3 groups for sighting laps. Steve Alleyne, obviously keen to get out on track used his own car for this only to return to the pit lane after 3 laps to be told he should have been wearing his crash helmet!!! The circuit opened at around 9:30 and from then until five o’clock with only one hours rest for lunch the car was subjected to the extremes of driving that it has taken in its stride over the past 18 months. Since Team Melot last visited the circuit they have fitted FM Anti Roll bars, installed polybushes and are now running Toyo R888’s making the car even better under track conditions. Tony, who paid for 20 minutes instruction from an ARDS instructor, said “The car certainly handles better compared to the last time I drove it. I even passed a few cars”. Once Steve had got used to being able to use the whole “road” he said “Wow! Fantastic day I will definitely be doing this again, thanks to Robbie, Steve and Tony for showing me the ropes. I can’t wait to see the video”.

In total Project Merlot clocked up 297 miles on the track that day and used £103 worth of fuel. Strangely enough, the last time we visited Snetterton we did 294 miles!
Posted by Roadster Robbie