The most famous MX-5 in the UK?

Project Merlot is a 1995 Mk1 owned by three MX-5 Owners Club members Jon Elsey, Martin Curtis and Robbie Marsh. The limited edition was saved from the scrapheap back in 2006.

The dead engine and blocked radiator were replaced in Robbie’s garage and the surplus parts were stripped and sold off at an Owners Club national rally and via the internet. Before long the car was 10% lighter and still road legal.

When it was raring to go, an open invitation was offered to all Eastern Region members to sign up as drivers for track days. Thanks to generous donations from sponsors Project Merlot has been able to introduce many beginners to the excitement of MX-5 motorsport. Project Merlot enables people to take a Mk1 MX-5 for a spin without risking their own pride and joy whether as a driver or passenger.

Thanks to extensive media coverage Project Merlot is possibly the most famous MX-5 in the UK and you can catch up with the racy roadster's latest news here on this very blog. 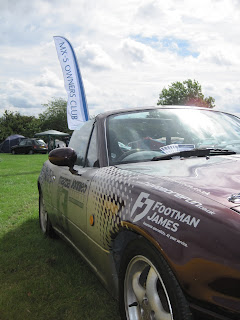