New Merlot driver Steve Bainbridge reports on his first ever Track Day drive.
Snetterton Sunday 20th February 2011
"The reality of getting up at 5 o’clock on a Sunday morning came as a bit of an effort.
The day had come when as last, I was going to drive around the Snetterton race circuit which included the newly completed section of track making up the new Snetteton 300. I was to drive a Mazda MX-5 known as Project Merlot.
It was very wet and cold as we completed our sighting laps behind the pace car, taking note of the position of the sharp bends before we were let loose on our own.
As it was my first track day I took Robbie Marsh as a passenger for some reassurance on where to brake and which lines to take into and out of the corners. On just my second lap I ran out of track at the esses (Known as Hancock corner to some of us) and ended up on the grass. Oops!! The more laps I completed the more my confidence grew and I began to enjoy the experience more and more. As it wasn’t a race or time trial I was able to find my own speed and drive at a pace I felt comfortable with. I had previously been a passenger at a track day, which is an experience in itself but doesn’t come anywhere near the thrill of driving yourself. As the day progressed I took others out for a spin, literally for one (un)lucky member. As the track dried out during the day I had increased my speed – not a good idea! Suddenly I was facing the oncoming cars. Luckily there were not many so I was able to do a quick three point turn and continue in the correct direction around the track. After that session I decided that was enough for the day, it was drawing to a close and I wanted to make sure I ended it on a high note.
If you get the chance to drive on a track day in an MX-5, do so – it’s very exhilarating and a great experience. Many thanks to all of the Project Merlot team."
This event was organised by www.javelintrackdays.co.uk
Steve, with Team Merlot members Martin and Jon. 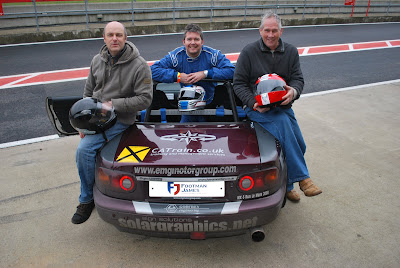 Read all about "Merlot Magic" in the February edition of Soft Top Hardtop, the MX-5 Owners Club magazine. New driver, Andrew, gives an account of his first experience on track at Snetterton. 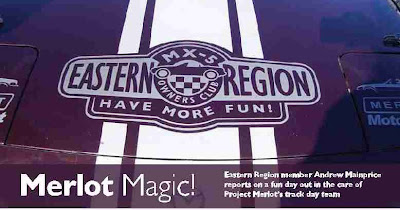