Project Merlot gets a dent! 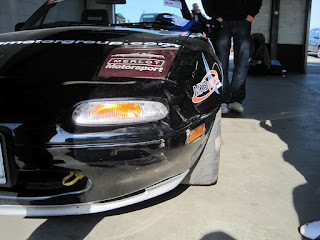 “Stay on the grey and keep off the green” Maybe not an exact quote but pretty much in the spirit of what Colin from Javelin Trackdays told us in the briefing at Snetterton Circuit early on the morning of Sunday 11 March. Good advice of course, and for the most part in the five and a half years of Project Merlot, it has stayed mostly on the grey with only the occasional trip on to the green followed by a quick return to the grey.
This track day was however to prove the exception. On the sunniest day I think Snetterton can ever have experienced, during the morning session, barely 20 minutes of track time passed without the red flags coming out again, and to be honest the boys and girls of Team Merlot were getting a little tired of all the return trips to the pits each time. That was until just before mid day when the action was stopped by yet another red flag incident. When your car is out there on track and the red flags are flying its usually a tense few minutes whilst you await the cars return to view, the heart races, the mouth goes a bit dry, but as the car comes in to view around a corner in the distance you once again breathe a sigh of relief that the car, and more importantly the crew, are back safely. Well so it was on this occasion, but he heart kept racing, and the mouth was getting drier and drier, but no Merlot appeared!
Enquires were made of some of the returning cars to see if they had seen what had caused the red flag, but no one seemed to know, all we knew was an ambulance and the recovery truck had been sent out! After an agonising few minutes the news finally filtered through; Project Merlot was the cause of the red flag. At that point concern was only for the driver Becky, and passenger Paul.
Merlot Black then appeared, to much surprise, driven back to the pits by Paul, and the full details began to unfold. A misjudgement of the driving line on new corner Oggies had seen Becky take to the green, but unfortunately rather than swiftly getting back to the grey, an inconveniently placed tyre wall intervened, bringing them to an abrupt stop!
Whilst part of the team gave the car the once over the rest headed hot foot to the medical centre to check up on Becky. All was well, with us all worried about Becky and her far more worried about the car!
With a bit of gentle persuasion Robbie put his bodywork skills in to practice ( which I don't think he knew he had!) and in next to no time the car was pretty much fixed, and best of all we were back out on track soon after. If you fall off we all know the best thing to do is get straight back on and try again, and all credit to Becky she was back out on track that afternoon, although we did send her out with Jon, who in the circumstances gave her a few extra tips on exactly how to keep on the grey.
With new drivers Peter and Becky plus Carole (making a return after her exploits in the ladies session at Silverstone during the National Rally weekend), and a sunny Snetterton all day, plus of course the extra excitement of getting a dent, all in all it was another brilliant day out for Team Merlot and Merlot Black.
Thanks to Javelin Trackdays for their usual excellence and once again apologies for bringing the morning session to an early close!
Look what I did! 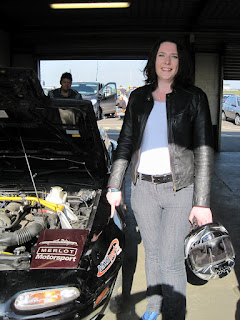 Robbie does some body work repairs. 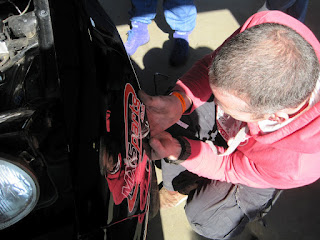 And off we go again. 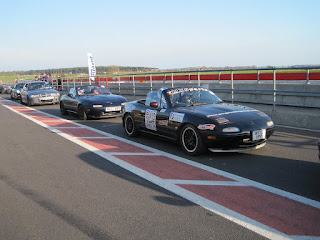