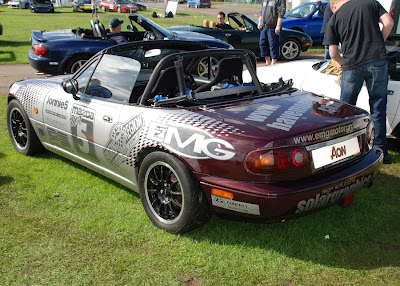 PROJECT Merlot took pride of place on the MX-5 Owners Club stand at JAE 07. The Japanese Auto Extravaganza is the biggest gathering of Japanese car clubs every year in the UK and features every japanese enthusiasts car imaginable, from the cute Suzuki Cappuccino to the mighty Nissan Skyline.

This was the first time the car had been seen out in public proudly carrying the name of AON car insurance who are now supporting the project.
Aon Car Insurance

The Merlot also toured the showground and put in an appearance on the Sunday at the MX-5 Nutz stand. 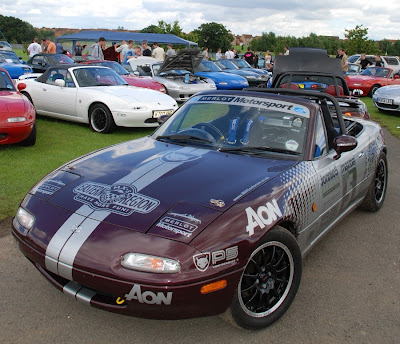 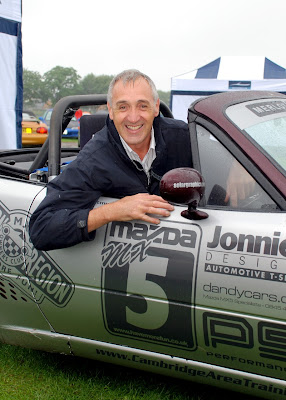 STUNT supremo Russ Swift couldn't resist climbing into the driving seat of the Eastern Region's track car Project Merlot.
The world's number one display driver has become a star after wowing audiences of programmes like Fifth Gear and Top Gear and proving to be the skills behind numerous car stunt TV commercials.
He also holds three Guinness world records - including parallel parking in the tightest space (just 33cm longer than a car) and the fastest do-nuts (10 complete revolutions in under 15 seconds).
The celebrity precision driver took a moment out of his spectacular show at the 2007 Japanese Automobile Extravaganza at Peterborough to check out Project Merlot and chat to the team. Russ said: "My background is in grassroots motorsport. I used to do autotesting and I've seen with projects just like this, how you can start at the bottom and work your way up."
After hearing the car had been rescued from a scrap yard fate for just £50, and rebuilt on a shoestring budget, Russ said: "This is right after my own heart this is.
"I love to see it. These days motorsport is so much about money - it's such a big factor in most forms of the sport. I like to see people compete, or just have a go. If they win it's a bonus!"
Obviously enthused by the project he chatted about the modifications made to the car and recommended the team consider fitting a limited slip differential to help cornering while on the track. So taken was he by the little roadster that with a mischievous glint in his eye he asked what the handbrake was like. Maybe Russ was angling for a quick spin... Literally!
Posted by mmm No comments: 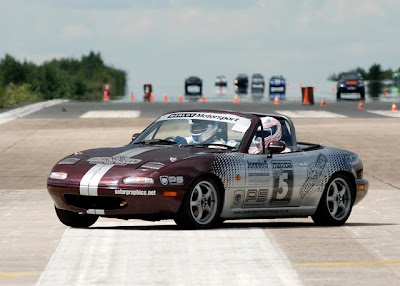 It was back to Woodbridge for another Javelin track day on Saturday 7 July. Drivers today were co-owners Jon and Robbie together with Neil Barber on his second outing to Woodbridge. And the big surprise of the day was the first appearance of Matt Barber who had, due to a knee injury, missed the last couple of Woodbridge outings and had been substituted!
For the most part the day was dry but a couple of short showers livened up the track again.
Project Merlot had some very welcome company on the day with the second appearance of Ian and Tula Wards new Roadster track tool together with track day regular Brian Hoskins in his SE Gleneagles.

Woodbridge is very much our home ground now and we hope to be back soon.

Thanks again to Javelin for their faultless organisation.

Merlot in the Media - again !

Project Merlot feature in the pages of the July 2007 edition of Classic Car Mart.

Click on the image below to read the article. 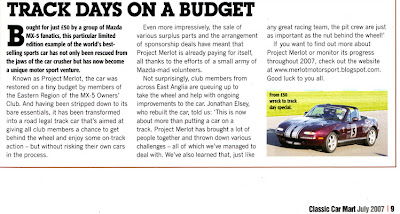