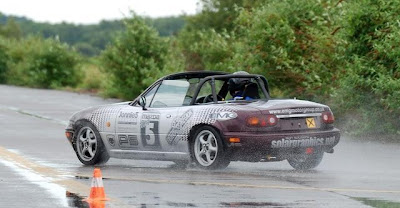 Saturday 16 June saw Project Merlot and the team make its second visit to Woodbridge Airfield for a track day with Javelin. The day saw a return behind the wheel for co-owners Jon Elsey and Martin Curtis, with new driver Kendra Dixon and second timer Katie Pyle returning after her trip to Curborough sprint.
The weather was not quite so kind as on the previous outing to Woodbridge with a couple of heavy showers but fears that the rain would spoil the fun were completely unnecessary as the extra wet track was even more exciting to drive with the lower levels of grip!
And to top off the day the car and drivers spent some time on the shorter handing circuit really putting the car through its paces and learning the difference between over steer and under steer.
The Merlot was joined on track by 5 other MX-5s on this occasion with Eastern Region regular track day fans Ken Ward and Brian Hoskins putting their own cars through their paces.
The day also saw the first track outing for Ian Ward’s track day MK1 which he had been working on in secret for the last few months.
The line up of 5s was completed by Eastern Region member Ben Edwards in his red MK1 and a “special guest” appearance on the handling circuit by David aka “Captain Muppet” in his matt back MK1 which he is currently competing with in the 2007 Eurodrift Pro-Am Championship.

Thanks to Javelin for another brilliant day at Woodbridge. We will be back soon.
www.javelintrackdays.co.uk

For more info on the Eurodrift Pro-Am Championship follow this link;
www.eurodrift.com

Click here for photos.
Posted by mmm No comments:

Project Merlot had its first trip to a sprint circuit on Saturday 2 June. Regular drivers, Jon, Robbie and Martin were joined by new girl Katie Pyle at the famous Curborough venue in Staffordshire.
The MX-5 Owners Club hold a non competitive fun day at Curborough every year on which the sun always seems to shine.
Full report to follow but check out the action here;

Team Merlot at Curborough the Movie.
Posted by mmm No comments: