After a busy weekend of stripping, fitting and sticking Merlot Black is beginning to look a lot more like a track car. If it could be unscrewed, or unbolted from Merlot “merlot” then it was, leaving just enough in place to keep it safe for its final drive to EMG Cambridge on the Sunday. After the major battle that had taken place at an Eastern Region tech day (back in October 06 ) fitting the roll cage, getting it out was a fairly simply task thankfully. Harness bar, seats, and various other “track” parts were detached and piled up next to the Merlot “black” for re-fitting. Of course “black” also had to be stripped with trims, carpets, unwanted electrics and more all being carefully removed as they will all be up for sale shortly. 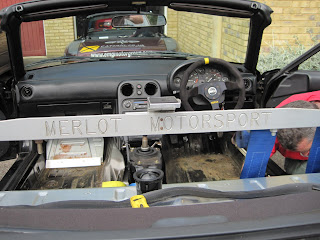 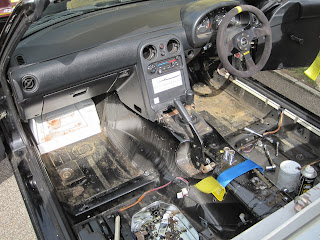 By early afternoon on the Sunday Merlot “black” was fully stripped, with harnesses, race seat, light weight door panels all installed. In tribute to the old car the original merlot headlamp covers and wing mirrors were fitted to “black”. The jury is still out as to whether these will all stay, but some of us thought it looked cool. 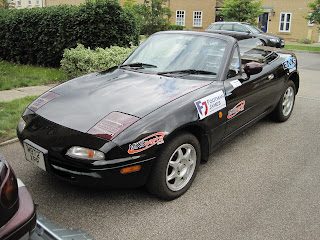 And so it came time for the final farewell to Project Merlot “merlot”. The car left Robbie’s drive way for the very last time, almost 5 years exactly since it had originally arrived as a wrecker. The “merlot” is going to spend its last few days at EMG in Cambridge where it will be stripped down even further, and ultimately just the rusty shell will be scrapped. It may only be a car but a lot of people have had a whole lot of fun sitting in the drivers and the passenger seat, it really has become more than just another car. 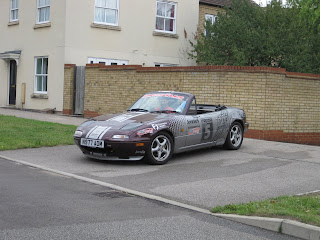 This is of course only the end of a chapter. Merlot “black” has the potential to carry on where Merlot “merlot” left off. There is still a lot of work to be done however. “Black” has a number of major issues to sort out, not least of all the smoky engine! It looks like despite all Robbie’s work on the old “black” motor we may still have to swap it for the “merlot” engine. And with “black” currently looking like an MX-5 4x4, especially now it’s a bit lighter than it was, a suspension swap (and drop) needs to be done, and then we will have the battle to get the roll cage in again!

Team Merlot would like to thank the following for all the assistance so far with “black”:
James Huggins without whose invaluable help this weekend we would have made far less progress,
Ady Neill and Solar Graphics ,
Footman James for their very efficient insurance swap,
EMG Cambridge for enabling the final strip to take place,
And Liz Turner “black’s” proud former owner.

If you would like to be involved with the continuing story of Project Merlot then please get in touch. 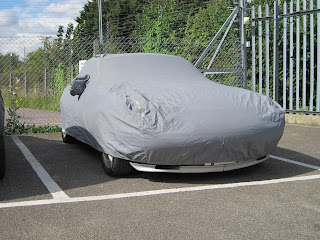 Awaiting the final strip at EMG. 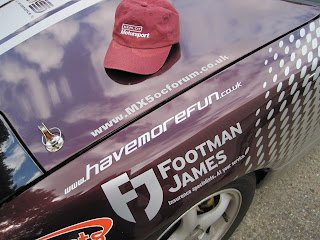