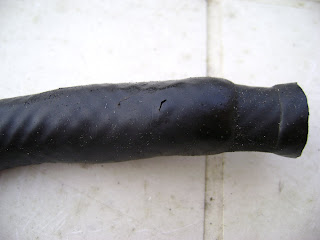 A new pipe has been fitted in place of the failed one, a propper metal pipe? No. That would cost money, money a lo-cost project like this doesn't have! A piece of power steering hose from a Ford Focus has been used that was destained for the skip... A temporary repair you understand!
Posted by Roadster Robbie